On a grey morning in early August, a handful of people gather on the cement patio outside of the Capuchin Services Center in Detroit’s Gratiot Town-Kettering neighborhood. Inside, several women are waiting to check in before picking up necessities like groceries or clothing from the nonprofit’s distribution program.

The line of visitors is part of an influx that staff and volunteers at the 93-year-old organization, which provides food and services to low-income and homeless individuals and families in the city, started noticing around the beginning of the year.

“Our numbers are not what they were from before the pandemic. The pandemic changed everything,” says Brother Gary Wegner, executive director of the Capuchin Soup Kitchen, which has provided food, clothing, and human development programs to Detroiters since it was founded during the Great Depression by the religious community of Capuchin Franciscans. 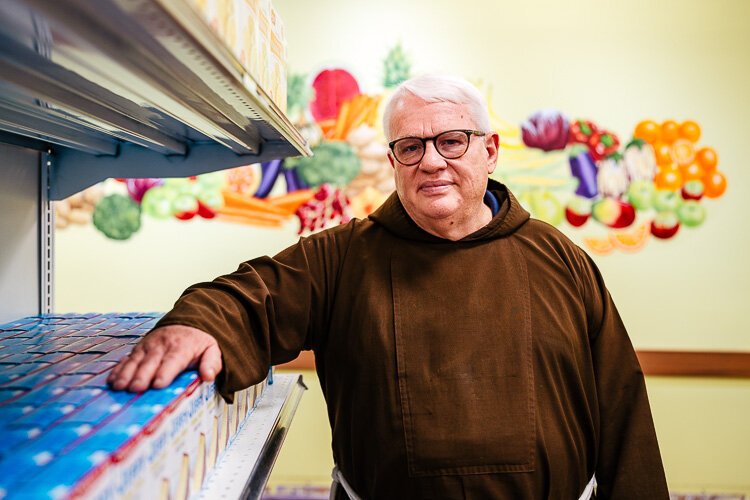 According to Wegner, who assumed his role in Detroit last August after spending nine years as the pastor of three country parishes in Wisconsin, the number of people visiting the Capuchin Soup Kitchen decreased in 2020 — a trend that ran counter to some organizations in other parts of the city. Part of that decline can potentially be attributed to increased government assistance like stimulus checks and unemployment benefits, although there are also concerns that COVID-19 may have played a role. Earlier this year, though, things started to change.

“Since January, the numbers have been going up. We’re at about a 25% increase since January,” Wegner says.

The rising level of need seen at the Capuchin Soup Kitchen this year isn’t unique. Despite leveling off in July, high rates of inflation spurred on by pandemic-related economic policies, supply chain issues, and war in Ukraine have impacted everything from housing to groceries and gas prices this year. As the cost of living remains high, nonprofit food providers across Detroit are working to meet the increasing need in the community — even amid challenges of their own. 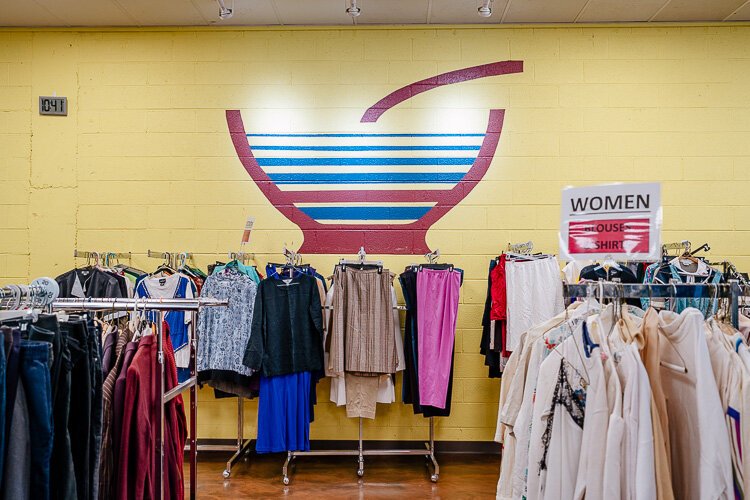 According to Wegner, the 25% increase in visitors to the Capuchin Soup Kitchen this year holds true at both the food pantry and clothing pantry at the nonprofit’s Medbury location. The soup kitchen on Meldrum Street, which primarily serves the homeless community on Detroit’s east side, has also seen a progressive monthly uptick in visitors since the start of the year. While neither location has returned to pre-pandemic levels of need, Wegner says workers have anecdotally observed an increase in first-time guests this year, although the Capuchins do not formally track data concerning first-time and returning visitors.

Despite increased donations during the pandemic that have remained elevated — a fact that enabled the Capuchin Soup Kitchen to start several renovation projects to improve guest experiences — supply chain issues have been a key challenge for staff at the Capuchin Soup Kitchen amid rising demand this year. Although the organization relies on its Earthworks Urban Farm for fresh produce, often with enough left over to offer local residents, long delays for “random” items like canned goods, salad dressing, mayonnaise, and crackers have set 2022 apart from pre-pandemic years for the Capuchins. 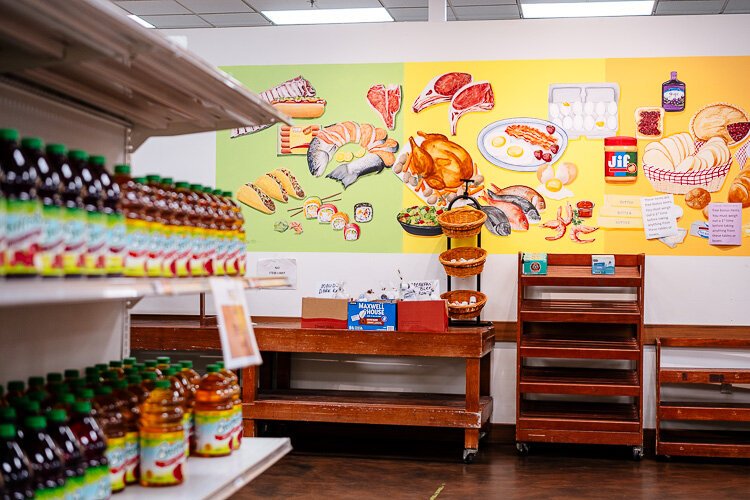 “I think we rarely had food shortages in the past. Things were just, we needed this, or we had standard orders with Gleaners (Community Food Bank) and things like that, and they came in,” Wegner says.

Although Brother Rob Roemer, the director of the Capuchin Services Center, has kept a close eye on the availability of necessary food items this year, sometimes visiting grocery stores to check on anticipated inventories and adjusting food orders accordingly, seemingly arbitrary delays have made the process of providing food to people in need more challenging.

“We’re anticipating shortages, but I think the way things are, we don’t know what they’ll be,” Wegner says. 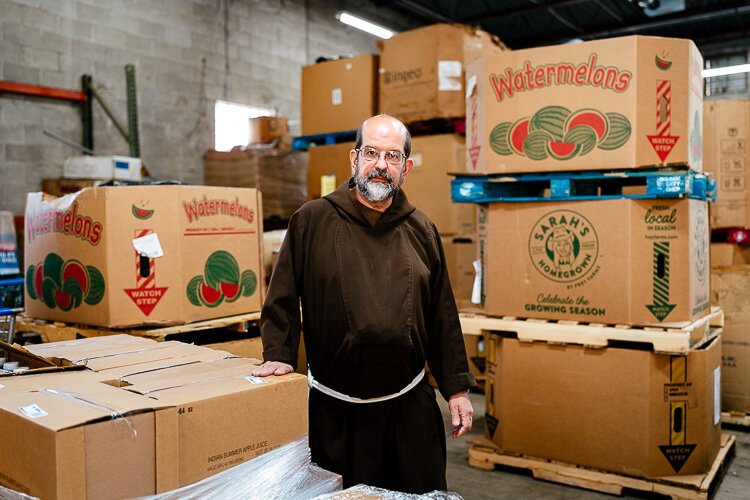 Brother Rob Roemer, the director of the Capuchin Services Center, speaks of the challenges the nonprofit faces. Photo: Nick Hagen.

Just outside the city in Oak Park, workers and volunteers at the food rescue organization Forgotten Harvest have also seen an uptick in the number of local residents in need of food this year at the nonprofit’s 219 food distribution sites across Metro Detroit.

“Even through other recessions — you know, there was a bigger recession a decade or so ago — the increase of people in need [amid the pandemic] was even above that,” says Christopher Ivey, Director of Marketing Communications at Forgotten Harvest.

According to Ivey, the nonprofit distributed one million portions of food to people in need throughout Metro Detroit between July 2020 and June 2021. This fiscal year, that number rose to 1.3 million. In March, Forgotten Harvest saw a 30% increase in demand for food compared to previous months.

Although some of those increases could be the result of warmer weather and more comprehensive data collection as part of the organization’s new strategic plan to better understand needs in the community, Forgotten Harvest also recorded a 30% increase month-over-month in April, May, and June this year. In June, the organization served 16,000 individuals — 10,400 more than in the same month last year.

Because Forgotten Harvest relies on rescued surplus food to feed the local community, food shortages and delays caused by supply chain disruptions have created unique challenges for the nonprofit.

“When things are in limited supply, that’s when we really start to struggle with the mix of food that we have,” Ivey says, noting that the nonprofit is “still feeling the effects” of a pork plant closure last November. Shortages of chicken and other proteins have also created challenges for offering food combinations that meet USDA MyPlate recommendations — one of Forgotten Harvest’s priorities. 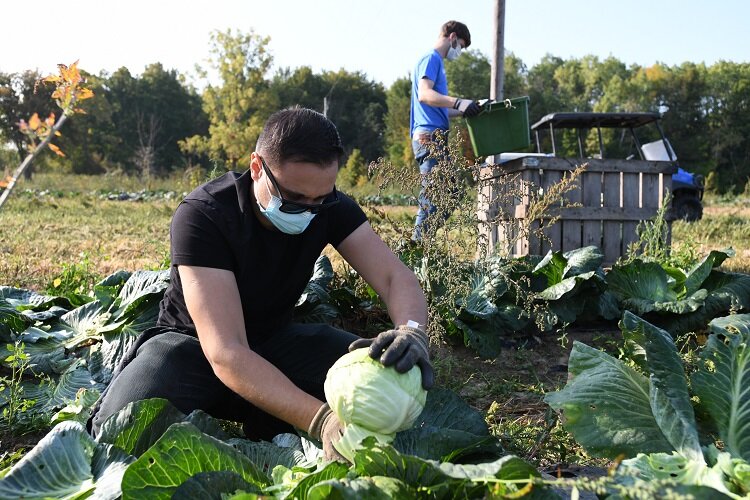 In response to the obstacles created by inflation, Forgotten Harvest’s food sourcing team has forged new partnerships with local food growers and producers this year to ensure families in need continue to have access to healthy food. Additionally, the organization has also continued to rely on Forgotten Harvest Farms for fresh produce (the farm yields between 450,000 to 900,000 pounds annually).

“The challenge is that running your own farm is more expensive than people think,” Ivey says.

This year, as the cost of farming has increased due to a combination of inflation, scarcity, and a fertilizer shortage exacerbated by war, Forgotten Harvest Farms is growing crops on only 70 of its 92 acres.

“Those are things that are so completely out of anybody’s control, but they affect all of us, even here at home,” Ivey says. 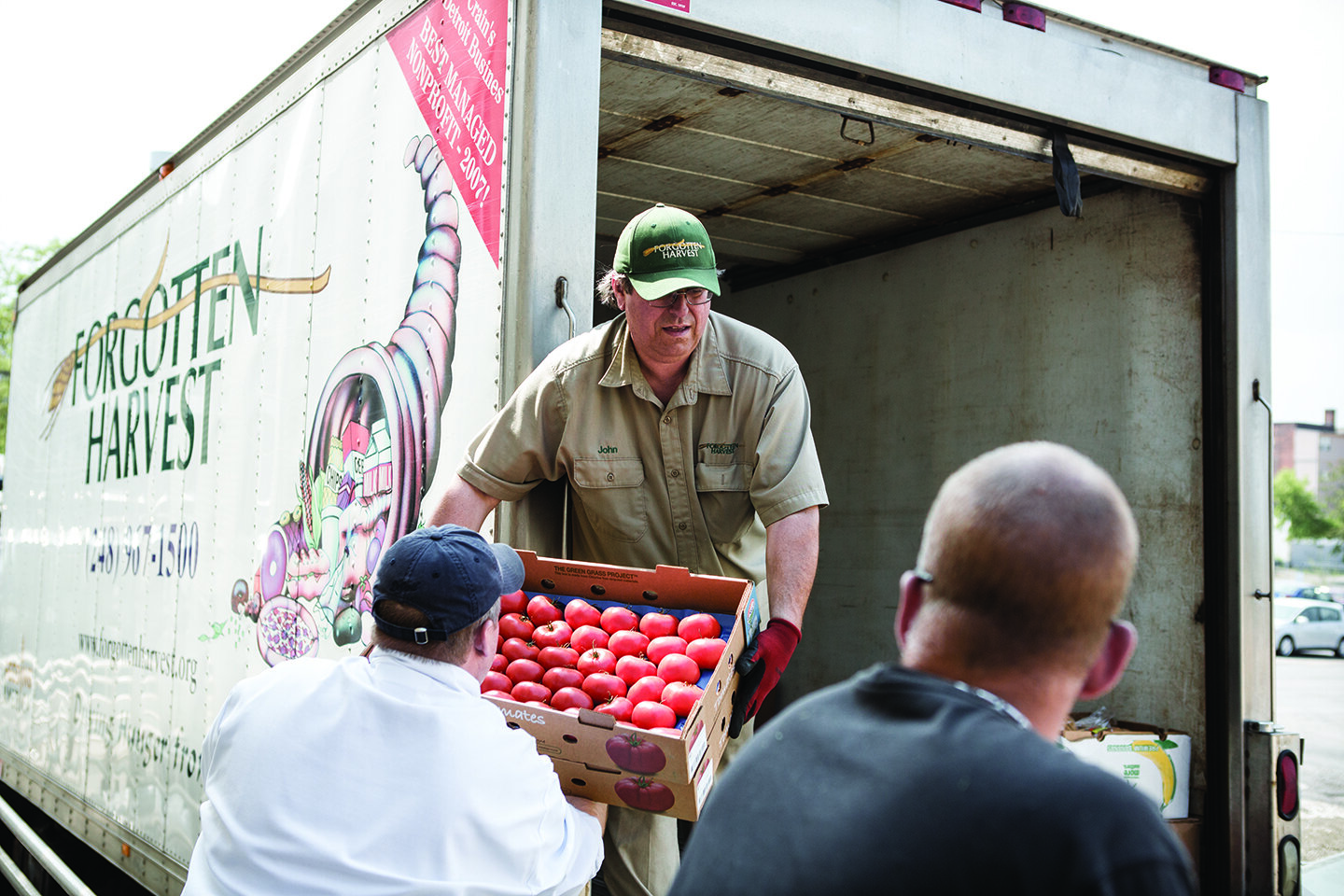 Increases in the cost of food due to inflation have also impacted the inventories of food banks like Gleaners Community Food Bank, which serves a network of over 500 food pantries, shelters, soup kitchens, disaster relief agencies, and other nonprofit organizations in Michigan.

Despite a temporary stabilization in demand for food between September and February, Gleaners saw a 40% increase in the number of households served at its mobile food distribution sites in Metro Detroit this March — an increase Kristin Sokul, Director of Advancement Strategy and Planning at Gleaners, says has sustained through today.

“When the cost of food and gas and housing all converged in that March timeframe, you saw a concurrent rise in need,” Sokul recalls. Despite that increase, Sokul says government support has dwindled this year, as temporary funding from the pandemic winds up.

At the height of the pandemic, Gleaners received an all-time high of over 2.4 million pounds of food per month from the U.S. Department of Agriculture, due to increased support from pandemic-related programs and funding. This year, Gleaners will receive a little over 300,000 pounds per month of food from the USDA, returning to the pre-pandemic levels of support seen in 2018. Since October, Gleaners has depleted its USDA inventory by two million pounds to maintain service levels.

“When we looked at our inventory in June 2022, our reserve inventory was 1.4 million pounds,” Sokul says, explaining that if Gleaners were to suddenly have no other food donated, those reserves would last only two weeks at current distribution levels. Although Gleaners constantly has food coming in and going out, the diminished support has left a mark.

“I think part of our biggest challenge is that there is less donated food available,” Sokul says.

For Gleaners, that means directly purchasing more of the food it distributes. Sokul says despite the organization’s strong relationships with food suppliers, the cost of produce, meat, and shelf-stable commodities has increased between 5% to 68% this year compared to pre-pandemic years.

Among Gleaners’ most requested items for distribution, Sokul says fresh milk has increased at least 46% for purchase this year. Although Gleaners received between 50% to two-thirds of its fresh milk from the USDA during the pandemic, the product has become a point of concern recently as one-time pandemic appropriations end.

Canceled USDA food deliveries through The Emergency Food Assistance Program (TEFAP) have also posed a challenge for food banks in Michigan this year, with 166.5 deliveries canceled as of mid-July, according to data provided by the Michigan Department of Education. Despite legislation that increased TEFAP funding nationally to $393.61 for fiscal year 2022, up from $335.6 million the previous fiscal year, and an additional $400 million in TEFAP food funds from the USDA, obtaining some items has remained challenging due to economic factors.

According to Tom Priest, supervisor of Food Distribution Programs at the Michigan Department of Education Office of Health and Nutrition Services, as the cost of food production rises due to inflation, consumer prices increase to cover those elevated production costs. Domestic food producers like farms and food manufacturers sometimes don’t submit bids to sell their food or commodities to the USDA when private customers, like grocery stores, are able to pay a higher price than the USDA’s Agricultural Marketing Service, which purchases commodities on the open market based on a procurement budget set by Congress for 2022. Those factors, along with supply chain and distribution disruptions, can contribute to canceled food deliveries.

Priest says the State of Michigan “consistently accepts bonus food offerings through TEFAP and requests any food declined from other states,” and also provides supply chain and food availability updates and feedback to the regional USDA office. The Food Bank Council of Michigan, which places orders for food banks in Michigan, did not respond to multiple requests for comment.

“USDA understands that disruptions caused by supply chain challenges are impacting USDA Foods stakeholders. USDA is employing a variety of methods to purchase as much food as possible and avoid purchase shortfalls and cancellations. There are a variety of factors that may affect the success of these procurements, including challenges vendors face in securing transportation, labor, packaging, and raw materials. Purchase shortfalls are impacting states across the country, and USDA continues to monitor these challenges and work to identify possible solutions,” Sandra MacMartin, public affairs specialist at USDA Food and Nutrition Service Midwest Region told Model D in an email.

MacMartin acknowledged that one-time pandemic appropriations have begun to end, adding that “USDA is investing approximately $2 billion in support for the emergency feeding network in fiscal year 2022, maintaining similar levels of support as in fiscal year 2021.” Additional federal funding has recently been provided to the USDA to support purchasing food for schools and fund state projects addressing potential gaps in TEFAP coverage.

Despite the challenges created by an unpredictable economy and shifting levels of government support, Sokul says Gleaners is committed to serving people and families in need across Metro Detroit.

“We want to assure the community that food is available and accessible, and we’re going to continue to be nimble and creative to do our best to meet people where they are and make sure they have nutritious food to feed their family,” Sokul says.